The Senior Ladies and Senior Men completed the Nordics Open sunday with their Free Skate. 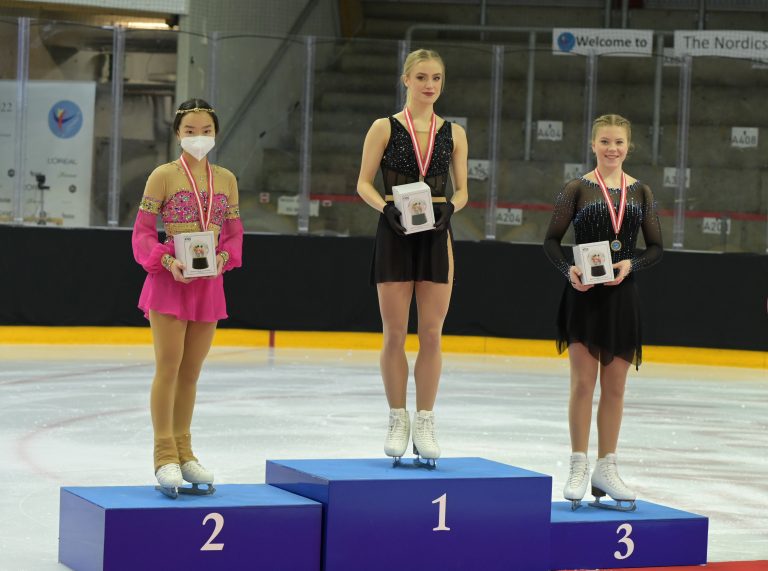 Oona Ounasvuori secured one more Gold medal to Finland by winning the Ladies competition. In her Short Program she made figure skating seem effortless with smooth landings and strong, beautiful spins, which gave her the lead. She also won the Free Skate with strong combination jumps, with credit for highlight distribution as well as excellent interpretation of music, skating skills and performance. Her total score reached 169.00 points.

The silver medalist came a long way to join our competition. Tzu-Han Ting from Chinese TaiPei was in third place before the Free Skate.  She is an expressive skater with high speed in her level-4 spins and a very good step sequence in the Free Skate, in which she came in second. Her total point score was 161,40.

The bronze medal went to Finlands Olivia Lisko, who turned a fifth place in the Short Program into a third place in the Free Skate with a total score of 149,63 points. 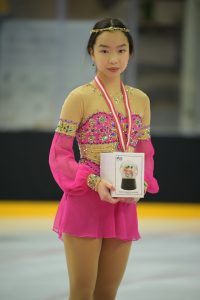 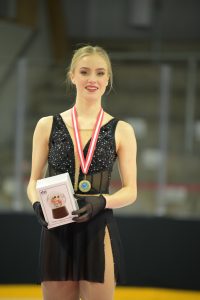 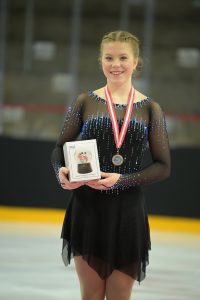 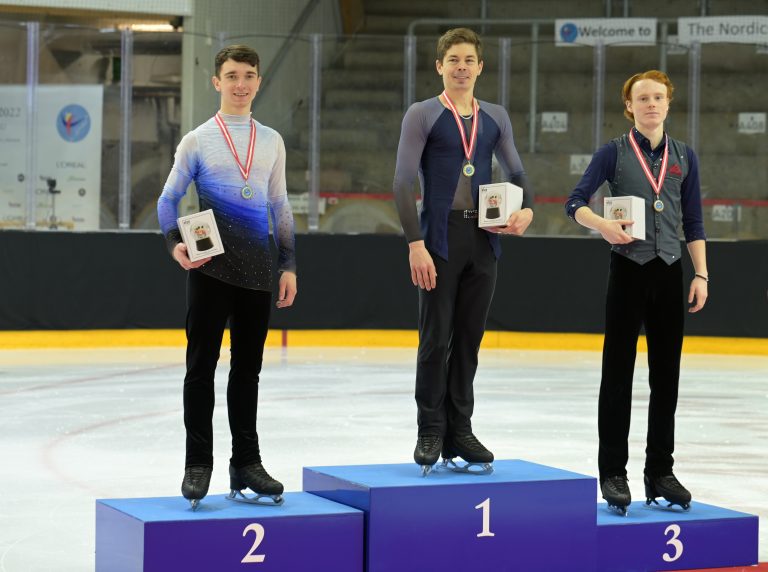 The Senior Mens event was affected by many withdraws. Originally there were 12 men entering the comptetion, but only five came through. But we were happy to have every one of them here in Hørsholm, as they as allways get the audience on their toes with the speed and action on the ice.

Valtter Virtanen, Finland, won both the Short Program and the Free Skate, and was thereby the winner of the Nordics Open with 190,63 points. Valtter presented a clean Short Program with a lot of plusses in the GOE’s and level-4 spins and step seqences. He opened the Free Skate with a 4 Toeloop that was judged underrotated, but nevertheless not seen many times before on Danish ice.

The Polish Kornel Witkowski claimed the silver with 182,10 points with his artistic programs where he among other presented a very good 3 axel in the Short Program and very good skating skills.

In third place was Oliver Praetorius from Sweeden, who was in fourth place after the Short Program.  He earned a total of 159,82 point. 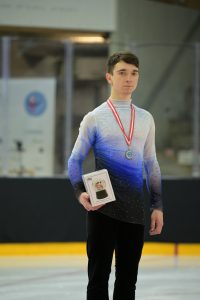 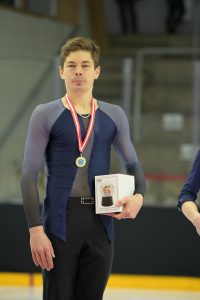 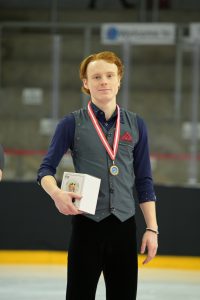 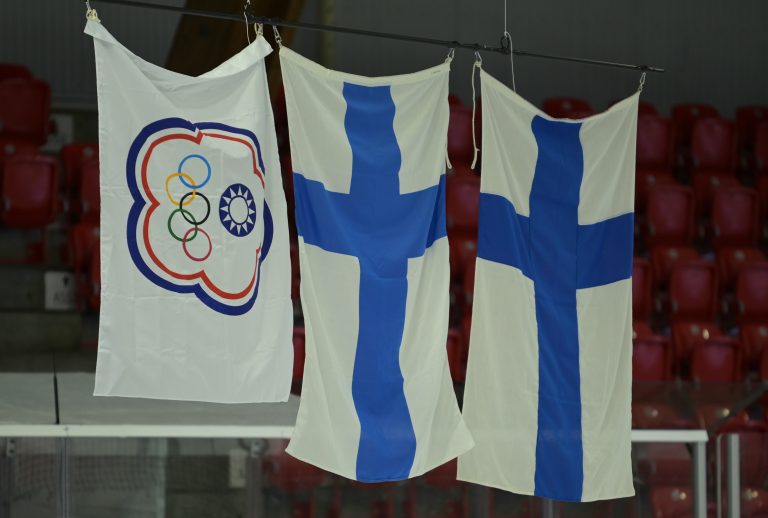 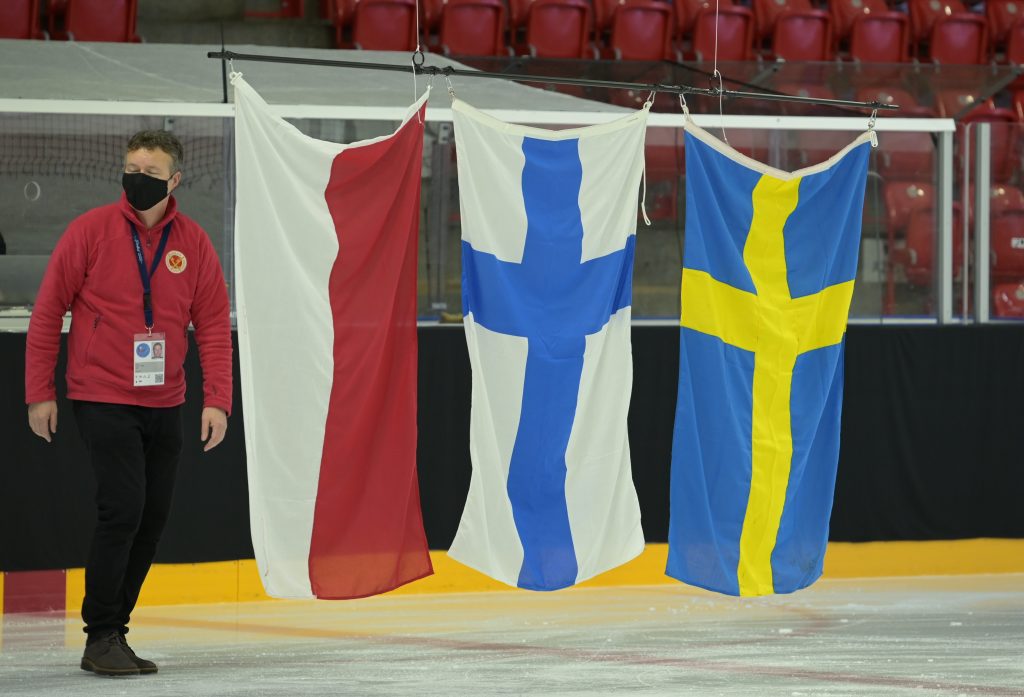 The Finnish team of Junior Ladies kept the top-five positions today, though the best three skaters swapped places with each other in the Free Skate. 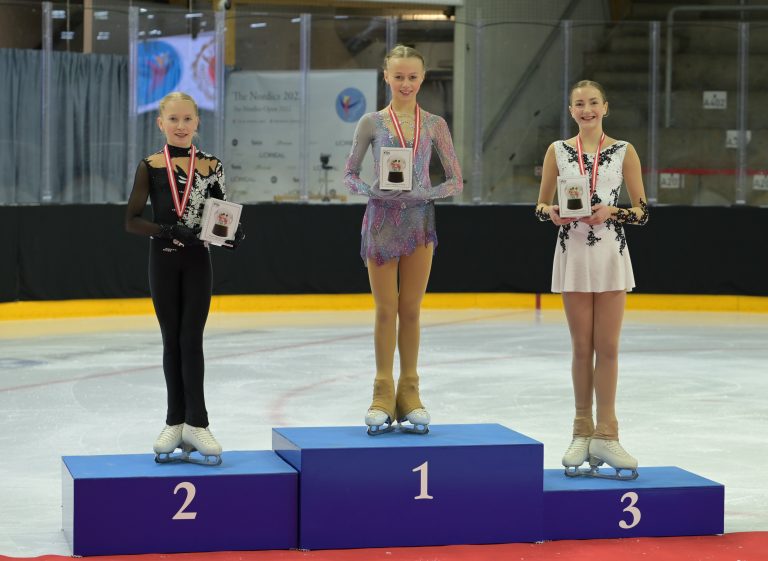 Overall Janna Jyrkinen claimed the gold with 150,79 points. Her program today was not as clean as yesterday, but the difficulty of the program was still high. She has beautifull movements on the ice and arms of a ballerina and presents gorgeus level 4 piruettes. The Free Skate gave her the  third place today.

Iida Karhunen won the Free Skate, but she was number three after the Short Program, which overall gives her the silver medal with 149,01 points. Though she doesn’t take much room on the ice, she captures the audience with her speed, selfconfidence and presentation as well as a strong and well executed program.

After the Short Program Petra Lahti was third, but today she came in second in the Free Skate with a very good program. Overall Petra claimes the bronze medal with 144,96 points. 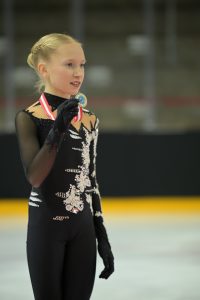 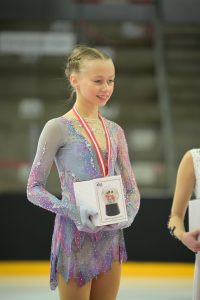 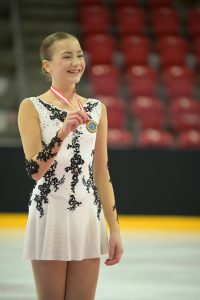 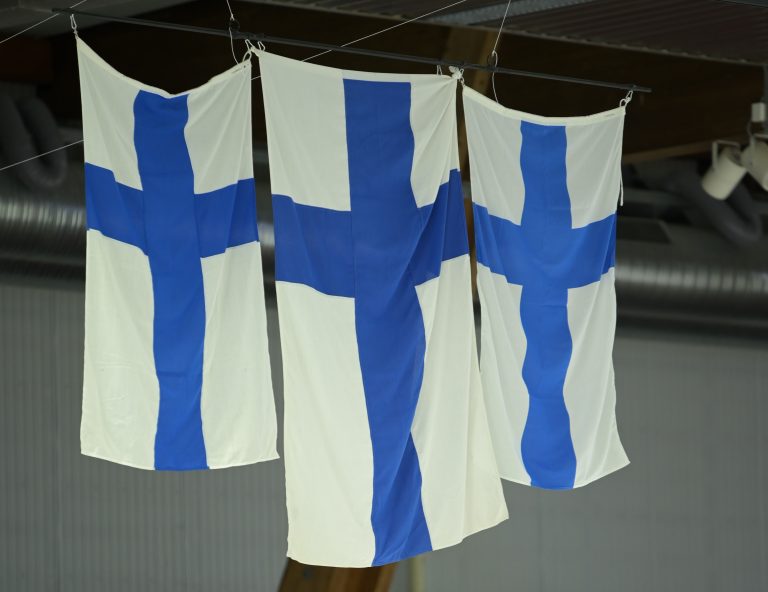 The second day of the competition was rounded with the prize givings in the Advanced Novice Boys, Advanced Novice Girls and Junior Men. The Mayor of Hørsholm, Mr. Morten Slotved, handed over the medals accompanied by the President of the Danish Figure Skating Union, Mrs. Camilla Lyngsø. 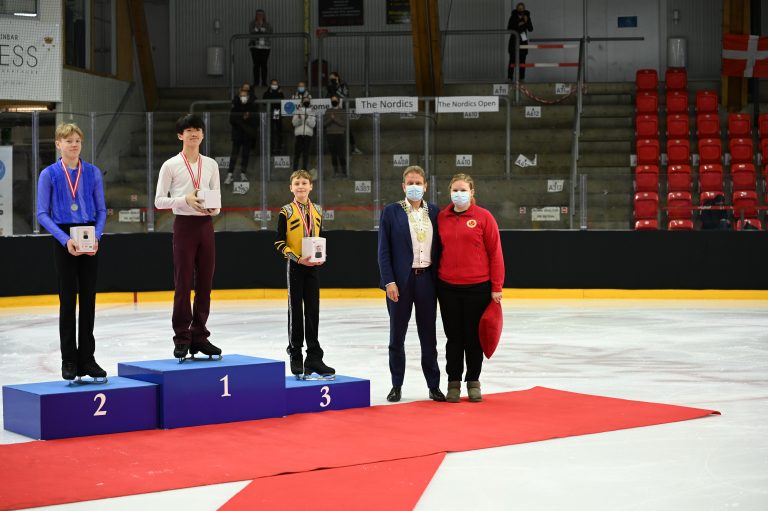 Matias Heinonen from Finland claimed the first place in the Free Skate with a good and difficult program, and took the gold medal with 100,99 points. In second place from Finland with 86,10 points was Anton Erkama, as Daniil Valanow from Norway took the bronze with 82,78 points. 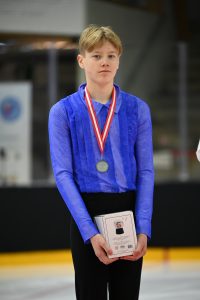 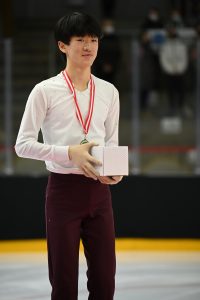 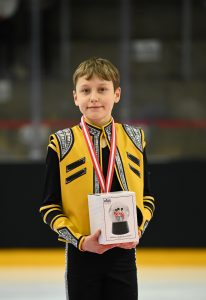 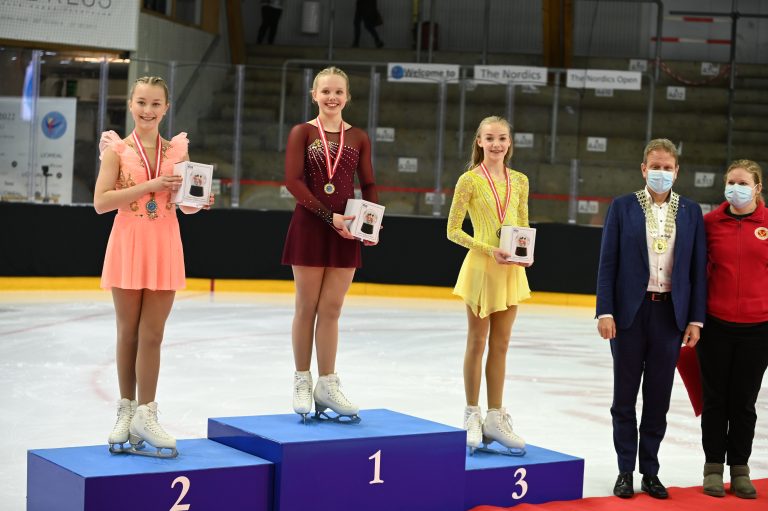 In the Advanced Novice Girls competition all the girls changed position after the Free Skate, and it was Lotta Artimo, Finland, who was in  fifth place after the short program, who claimed the gold today. Lotta earned a total of 106,88 points with a program with a lot of tripple jumps and good speed over the ice. Also from Finland, Amanda Eskelin, took the silver with a total of 104,12 points while Norways Pernille With was third with a total of 97,91 points. 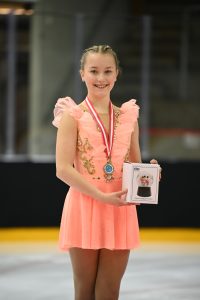 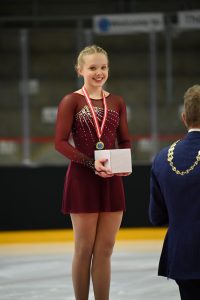 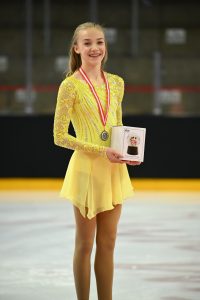 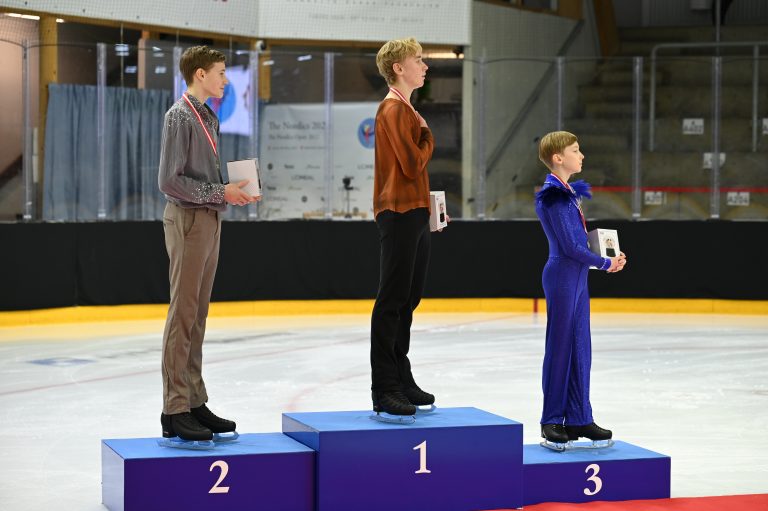 Top three in the Junior Mens competition was very strong junior skaters. The winner Andreas Nordebäck, Sweeden, again performed a very convincing program packed with difficult jumps and beautifull spins. He has overall good performance skills and his 130,04 points in the Free Skate was well deserved. The total score was 195,87 point. In second place came Casper Johansson, Sweeden, with 182,48 points and on third place from Finland, Matias Lindfors with 161,38 points. 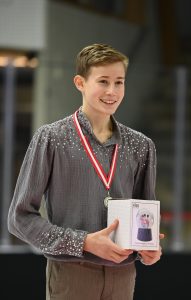 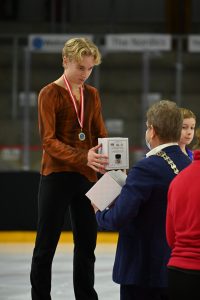